Over a year ago, I wrote a  blog about Multiple tier architecture and continuous delivery with Power BI, mainly an overview of the setup and manually creating development and production content. This blog will continue this story in more detail of Power BI CI/CD with Azure DevOps automated deployments. A solution where Dave Ruijter, Ton Swart and I worked on over the last year. The second co-authored blog with Ton Swart, read along!

Please also check the updated blog with the most recent version of the DevOps Extension.

Short recap of what I’ve written before on this topic. The multi-tier setup, also known as DTAP (development, test, acceptance and production), is a much-used setup in IT. Identical to what we do while developing Power BI content in a managed scenario.

In software development, we work with a continuous integration process which helps us to automatically merge artifacts and let us all work with one code base, as well as continuous delivery to automatically deploy our solutions. This type release management process is supported by a Microsoft service, Azure DevOps.

Azure DevOps (formerly known as TFS or VSTS) provides version control, automated builds, release management and lots more! By working with Azure DevOps, we need to save our pbix files in a central place where it is accessible for the DevOps service to be deployed. In the next chapter we go in more detail on a central storage and versioning of your Power BI files in relation to Azure DevOps.

The setup below, is where we will elaborate on in the next chapters. This includes all parts like versioning in Git, continuous delivery and how you can set this up yourself!

Versioning of Power BI files can be an issue. Where do you save your pbix files and how do you make sure that these files will be included in a back-up, or even more often saved as intermediate results. This can be done more efficient. Depending on the size of your project, you can go for a low-level easy solution with OneDrive or professionalize it with Git!

One of our best practices listed on the Power BI Cheat Sheet, is to save your pbix files on SharePoint or OneDrive. Simply, because this helps you to at least have backups. In your day to day work with Power BI files this can be unhandy, because you want to stay away from manually uploading and downloading the pbix files every time you have a new version. Luckily, the SharePoint Sync option can help you with simply synchronizing the files between your local system and SharePoint or OneDrive. Read all about this option in the Microsoft documentation.

Still using a classic Power BI workspace? Pleas know that it actually is an Office365 group including additional resources like SharePoint. You can use this SharePoint location to save and sync your pbix files! Be aware of the differences in the classic and new workspaces! In my opinion you should always go for the new experience workspaces from now on because of all additional functionality. Adam Saxton (Guy in a Cube) explains the differences in workspaces in this video.

The approach of saving your pbix files on SharePoint or OneDrive works fine for small projects. But working in an enterprise organization, or Azure DevOps requires a more professional solution, which we can do by using Git repositories for versioning.

As a developer we might be used to working with Git repositories, especially in order to have release management in place. Git is well known as a modern version control system. By using Git, you will have a local copy of the code on your machine as well. Based on these local copies, you can continue developing. After you’re finished with your work, you can easily push your local repository to merge with the online (shared) repository. By doing this, only the changes will be pushed and saved in the online repository. In fact, only for the new code there will be a new version created.

Versioning of Power BI files is a whole different story. Since pbix files are binary files, there is no way of checking-in only the code changes. The process of pushing changes identifies the pbix file as one object which has a new version.

Because your pbix file also includes the imported dataset, the files can become very large! (also check my other blog about improve report building) Git is not very good in handling big files by default, but luckily there is a Git extension called Large File Storage (LFS). This extension is used to manage large files in a separate Git repository. To keep things well performing, the main repository will only include pointers to the actual locations. For every file you will save, Git LFS creates a pointer and saves the binary file (pbix file in our case) as a blob (binary large objects).

So far, the Continuous Integration setup. But how does this all relate to continuous delivery of Power BI content? Azure DevOps is a Microsoft cloud service to collaborate in your team and ship deliverables faster by automating. Since this is running from a cloud perspective, the artifacts need to be stored somewhere central, which is the Git repository.

API’s seem to be everywhere these days. Every popular online service has one, therefore also has the Power BI service. API’s allow developers to interact with online services without actually having to point and click their way through a UI. Instead, many services offer APIs (in particular, REST APIs) that offer up an industry-standard way of exposing information to the world.

Because we want to focus on the flow of the script (ie creating workspaces, importing reports,  changing parameters and datasources) instead to bother about HEADERS, Body payload, Authentication etc, we created a PowerShell module which wraps all the Power BI REST API call’s into cmdlets we can use in our scripting. So instead of using the Invoke-RestMethod we can create a workspace using the cmdlets. For example, New-PowerBIGroup -Name “DP_DEMO_dev”.

To take it even up a notch, how cool would it be if we can use our PowerShell module to create a custom task, we can use in our Azure DevOps build- and release pipelines? Very cool! So we did! We created our custom tasks for creating Power BI workspaces, importing Power BI reports and changing a connection or parameter.

Register an application with Azure AD to allow your application access to the Power BI REST APIs. Follow the steps on the Microsoft documentation here, using the Native application type.

For the deployment of the Power BI files, place some *.pbix files in the SampleFiles folder of your Git repository.

Let’s take an example. We uploaded the Power BI file “TestDeploymentParameter.pbix” which is a Power BI report with a simple date query.

We simply control the date displayed in the report with the “SelectYear” report parameter. Value “CY” shows the current year date and “PY” is used for displaying the previous year date (also check this blog about parameterize your datasource).

To (automatically) build and create an artifact (package) of your code (ie pbix file), create a build pipeline in Azure DevOps.

When you change and push your code to your version control repository, the build pipeline kicks off the default trigger to build your application.

Now the extension is installed and we have an artifact containing some Power BI files, we can begin building our release definition. Let’s start with a development stage and adding the build artifact from the previous step to the release definition.

As the name suggests, the value of a variable may change from run to run or job to job of your pipeline. Almost any place where a pipeline requires a text string or a number, you can use a variable instead of hard-coding a value. The system will replace the variable with its current value during the pipeline’s execution. Variables can be scoped on a stage or a release. Use a stage-level variable for values that vary from stage to stage like “environment”.

Then configure this task using variables like $(PowerBIAppID) created in the previous step, to configure the “Client ID” property and $(PrefixGroupName)_$(environment) for the Power BI workspace name. 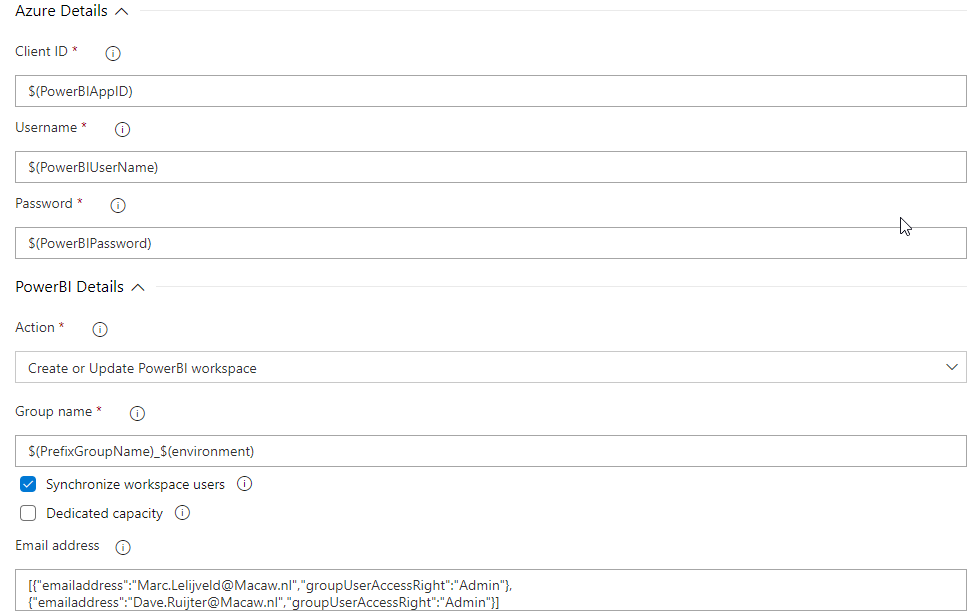 Add another step to the release pipeline to publish Power BI files from the artifact by adding the “Power BI: Reports Tasks” custom task.

Then again, configure this step. You can select the Power BI file(s) from the artifact using the […] button.

Once again, add another “Power BI: Reports Tasks” step to your release pipeline. Configure this task using the action “Update the parameters values for the specified dataset” and enter the “Dataset” and “Parameter details” parameters.

By repeating the above steps a few times, your pipeline could look like this:

And the definition in your Development stage could look similar to:

When all configuration is done, creating a release will automatically create a workspace in PowerBI.com, upload the report(s) and change the dataset parameter “SelectYear”. Let’s try!

Check your deployment logs and verify that every step was succeeded.

And last but not least check the report. That worked!

Wrap up and remarks

According to our way of working, this approach is a real added value. By deploying our Power BI content from a DevOps perspective, we can easily move our artifacts (pbix files) from workspace to workspace. We can even roll-back to an earlier version of the artifact in the unlikely situation that we messed-up somewhere. All based on our versioning in Git.

Of course, the end-to-end process needs to be customized according to your own way of working. With the extensions available in the Azure Marketplace, you can easily add it to your own processes. It is definitely most powerful once you’re combining it with deployment of other components. Let’s say, your data platform or other things that can be deployed with Azure DevOps.

Both are shown in demos or videos at conferences by Microsoft. In our opinion, none of them covers everything end to end including versioning or as part of existing deployment pipelines.  At least, not yet… However, they look very promising, definitely keep an eye out for them.

This blog is co-authored by my colleague, Ton Swart. Ton is a Data & Analytics DevOps Engineer at Macaw and has over 12,5 years of experience in IT. This includes roles as BI Consultant, Data warehouse specialist and IT consultant. His focus is on Business Intelligence. A few of Ton his expertise is CI/CD with Azure DevOps, PowerShell as automating Power BI deployments.