It has been a month since my last blog post. So, it was about time for new content! Since last month I’m busy preparing for the Power Platform Summit at the end of March in Amsterdam, so not much time left. Find more about the summit on my events page. So far so good, now time for some blog content.

In this blog, I will tell you more about dynamically expanding and appending tables with Power Query. I was triggered by this topic by Matthew Roche on Twitter. Thanks for that! In this blog I’ll describe how you can get all column names of all tables dynamically before you append all tables. With this, your table will automatically add new columns when the structure of your file changes or extra columns are added to your source. 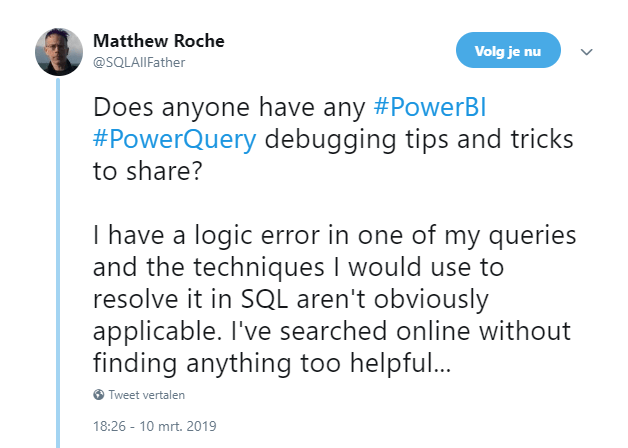 After some debugging Matthew came up with the following conclusion:

The problem is that the column used for the song title was named inconsistently in some files produced by the web crawler. The rest of the columns were named consistently, but not this one…
…
The files whose columns matched the root query definition had their song data returned properly. The others had all song titles missing.

In this case, it wasn’t clear that there was another column in the dataset which included all missing data. By dynamically getting the column names before expanding, you can see the other column popping-up, which is not the result what you expected.

To get things a little bit more specific, let’s use the following case:
I’ve a SharePoint folder including multiple Excel files, which I want to combine, since they all have the same structure. In that case you don’t want to create separate queries for each file but want to append those files dynamically. To do this, you have to connect to the SharePoint folder and afterwards combine all files. By clicking the Combine button, Power Query will generate a function which runs over all these files, generate tables and appends those tables afterwards.

Power Query asks you to pick an example file for generating the Power Query function. Automatically this will be the first found file in the SharePoint folder. Looking at the code generated in the function, this will include all column names to expand hard-coded! But what in case one of our files include extra columns than what is available in our example file? These column names are not included in the generated code, since that is based on only the first file. Conclusion: They will not be expanded and will never show up!

Get your column names dynamically

In my case, I have three files which are almost the same. They all have a Date, Category, Amount and Price column. But in the third file, I’ve added Brand as well. Since my query is based on the first file, this column will not show up. With generating the Function, Power Query automatically appended all tables in the folder according to the generated function. With that, it also generated the steps as shown in the screenshot.

Once we open the advanced editor, we see the following line of code generated. The #”Sample File” tells us that it is getting all column names from the Sample file to expand. In our case the Sample file, was the first file.

So, we want to dynamically expand our table based on all found columns in all tables. To make this happen, we jump a few steps back in our applied steps to the Removed Other Columns1 step. When we click the expand button and load all column names, we already see the Brand column popping-up. But still this will be a hard-coded result. We want to get all column names dynamically. To do that, we are going to add another step in between here.

Since the Table.Expand function only accepts lists as an argument, we need to convert this table to a list. We’ll do this later on in the expand step.

Now, we’ve added a few steps in between. At the moment we have an Expression Error, since our Expand table Column1 step refers to the last added step before, which is Remove Duplicates. We want this step to use the result of our table before we added all steps in between. Power Query always first calls the result of the step before, so we can easily change this to the result of a few steps before. Referring to a previous step always starts with a hashtag. Now we only have two steps left.

Now, we see the Brand column popping-up as well! It will remain empty for the files where we didn’t have this column. But at least it is available now!
To see the complete Power Query code, scroll down all the way to the bottom of this blog.

By directly calling the column name, which is GetColumnNames in this example, after the step with the previously defined result, it automatically formats as a list. So #”Removed Duplicates” is the previous step we’re referring to.

I’m aware of the fact that the last step of Power Query which we replaced, does something similar based on the Sample File. But since our sample file can only be one file, which might not include all columns, this is a more sustainable solution. Even when there are new columns added in the future, they will automatically appear in your table.

Besides that, you could have done the same, in less Power Query steps. But I’ve done this in extra steps consciously. With that I keep everything organized and understandable in case I need to transfer the code to someone else.

The complete Power Query code is shown below. For re-use, you only must be aware of a few things:

It is easier to re-use this code, by first generating the function in Power Query and change the code afterwards.

18 thoughts on “Dynamically expanding and appending tables with Power Query”